After our wonderful stay at the Seven Feathers resort, we decided to push some miles that day over the Siskiyou mountains to avoid ice and or snow in the early a.m. to land at the Rolling Hills Casino in Corning, California (the biggest olive producer in the U.S.A.). Things were going great, we were making good time, and knew that we would beat the dark by about an hour. Coming into Redding California and BANG!! Lost power steering, and brakes, so I pulled off the next exit to see what happened this time. We ended up blowing the fan belt due to a freeze up. You thought driving one of those smart cars with a blown belt was bad? Try a 1 ton dually with a 35′ 5th wheel with no brakes or power steering. It will sure have you with white knuckles gripping that steering wheel. Since we had no auto parts near by, we ended up calling Good Sam’s Road Side Assistance to have a mobile mechanic fix the issue. Once the issue was fixed, I asked him if he could check to see what his thoughts on the tail lights to the trailer was and then the fun started.

The mechanic changed the fuse and bam, all of the lights were working again. Boy were we happy, but should have known that this wouldn’t last long. Not even a city block away heading out on our way to the casino in the dark the tail lights went out again. We ended up pulling over to find a spot near by since we couldn’t drive without tail lights and ended up finding an RV park 3 miles away right on the Sacramento River. Great! We will use our trusting GPS to show us the way. We plugged in the address and followed the directions. The GPS took us to a mobile home park and called our final destination where 2 cops were at a house taking a call… Are you kidding me!!!! The cops were on the right hand side I turned left, lightly touched the brakes to show there was tail lights on the trailer. After that happened we decided to not only use google maps for directions, but also named the GPS Bob.

We finally found the park and were just relieved to have found it. The park was 42.00 a night, was on the Sacramento River, had tennis courts, and disk golf, with cold water showers. Wasn’t the best, but could have been a lot worst. Brandy always liked the white picket fences, so she got one. We did get 46 TV stations on our antennas for free which was nice, and to have that warmer weather was nice also. Our next blog will be based at the Rolling Hills Casino (where we are right now for a couple days) 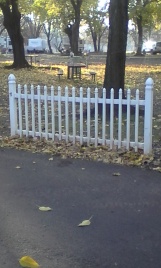 Have you ever wanted to chase your dreams but couldn't manage to get your foot out of the door to do it, due to money, or fear of the unknown? We decided to take a gamble at it by selling everything, buying a truck and trailer, and figuring out how we are going to manage having a family of 5 with a cat and dog fit in a trailer full time while we travel the country. We hope you will follow us along on our journey. View all posts by RAT PACK DRIFTERS