”In 1974, with much media fanfare, dare devil Evel Knievel tried and failed to leap the mile-wide chasm of the Snake River Canyon on his specialty, engineered rocket motorcycle. His drogue parachute accidentally malfunctioned, and opened on take off. Evel and his contraption floated to the bottom of the canyon, landing on the near shore (if he would have gone into the river, his safety harness probably would have drowned him)”.

Most of us, but not all of us, remember or have heard about dare devil Evel Knievel. Some of the jumps that he made, no sane minded person would even think about doing. One of his big stunts on the Snake River in Twin Falls, Idaho turned out to be a disaster due to issues with his parachute. Today, when you make a pit stop to the location of his jump, you can find a grave-stone like marker with a carved likeness of the rocket powered motorcycle. The large dirt ramp is approximately 2 miles east of this point on the south ridge of the canyon. 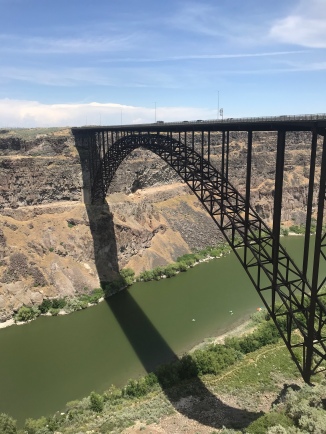 If this isn’t something that might interest you, it’s still worth the trip to see the magnificent structure of the Perrine Bridge that you cross to see the historical marker.

The bridge is named for I.B. Perrine (1861–1943), who spearheaded the early 20th century irrigation projects in the Magic Valley region and is largely credited as the main founder of Twin Falls; a statue of Perrine is at the visitors’ center at the south end of the bridge.

Have you ever wanted to chase your dreams but couldn't manage to get your foot out of the door to do it, due to money, or fear of the unknown? We decided to take a gamble at it by selling everything, buying a truck and trailer, and figuring out how we are going to manage having a family of 5 with a cat and dog fit in a trailer full time while we travel the country. We hope you will follow us along on our journey. View all posts by RAT PACK DRIFTERS